Help in Times of Trouble

We may look back in wonderment at our busy pre-covid lives. But we long to see people embracing God’s values, in His Kingdom.

I guess that during lockdown we have thought of the angel coming to Gideon on the threshing floor (Judges 6). He brought news of salvation, physical and spiritual, from God. Like Gideon, we may feel our small everyday contribution is not going to make a difference, but that is where God sent His angel.

Simeon met Mary, Joseph and the infant Jesus in the temple in Jerusalem, as they were going about their duties and he recognised God’s salvation prepared in advance (Luke 2:22-32).

Lockdown has brought a routine of following rules, doing the ‘right thing’ and being considerate of others. We should not belittle this or grow weary. As believers, we are following God’s requirements: ‘..to do justly, love mercy and walk humbly with your God’ (Micah 6:8).

God promises to be: ‘..an ever-present help in time of trouble’ (Psalm 46:1). I was reminded of this a few weeks ago, in another lockdown, overhearing a conversation in a hardware shop between a tradesman and the shopkeeper, along these lines: ‘What are we going to do if these measures don’t work? It will be God-help-us!’  ‘Well, yes, if ever we have needed that, it’s now!’

Some individuals are looking to God and turning from reliance on the distractions that the world offers. I remember visiting the model village at Babbacombe, near Torquay. One of the model buildings that stuck in my mind was the ‘Lord Ellpus Hall’.  We may look back in wonderment at our busy pre-covid lives. But we long to see people embracing God’s values, in His Kingdom.

May God bless and enrich your life

Please feel free to share this article and other articles on this site with friends, family and others

The Belt of Truth

Pilate, a roman governor well-schooled in politics, asked Jesus at His trial 'What is truth'? Watching the sad pantomime of the American election last year, I guess that we can understand what he meant – for many people truth is not about what is really going on; it’s about how they present what’s going on, and if they find that still doesn’t help them achieve their goal – they lie…

Jesus, on the other hand not only undertakes to tell us the truth about what is going on (in the bible He is called 'The Faithful witness') but is THE TRUTH behind everything? The well-known scripture from John 14:6 says 'I am the way the TRUTH and the life'. So, what does this mean?

The book 'Peace Child' describes early encounters between some Christians and tribes in the far East. The people that they met were one generation away from full-on cannibalism. Their moral values were such that the highest honour was given to those who could befriend someone, play them along for a while (the longer the time the higher the honour) and then betray, kill and eat them. The problem was of course that no one could trust each other and so they needed some rules to enable life to continue. Two important rules were: 1) That you couldn’t betray a possible future or present mother-in-law (or the tribe would die out in a matter of years) and 2) If another tribe gave you a 'Peace-child' (literally one of their children to become a member of your tribe), it was taboo to harm anyone from that tribe whilst the peace-child lived.

Well of course the message that the Christians were able to announce was that Jesus was our 'peace-child' – forever - and therefore the lying and treachery didn’t need to carry on. We may look at this as a story about people with primitive beliefs but if we examine ourselves and our own society, we see that truth is indeed hard to find and lies and treachery are easy to find. Experience has taught us that trust based on 'speaking the truth to one another in love' (Ephesians 4:15) is not what we expect – people are very often after something. There is a famous phrase from a government enquiry. When a high official was asked if he was lying, he said 'No, I was merely being economical with the truth'! 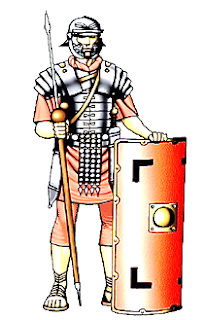 Well it is very difficult to have trust without telling the truth. If you find out that someone is lying, trust tends to disappear like a puff of smoke. This is why when Paul is describing the armour of God in Ephesians 6 he starts with 'Stand firm then, with the belt of truth buckled around your waist'… He knew that the stability of a roman soldier’s armour was his belt. His fighting ability – the very core of it – was about the belt being in place and properly fastened. It provided a means of ensuring that he was mobile and none of his clothes or weapons would trip him up. It provided an anchor point for weapons that he might carry with him and it shared some of the weight of his breastplate carried by his shoulders down onto his waist. If you look at the picture of a roman soldier with his traditional belt in place, you will see that it also afforded some protection for other vital tackle – and thereby his ability to father children!

So, all in all, Paul knew what he was doing when he started with the belt of truth – without it our Christianity falls apart! We believe in the truth – we believe the truth of the gospel – we are persuaded that God has shown us the true way to eternal life through the bible and His Son Jesus Christ. Without that belief it says that it is impossible to come to God (Hebrews 11:6). The Holy Spirit – the Spirit of Truth – has been given to us to reveal all truth to us. Here Jesus is not only speaking about just reading the bible but that the Holy Spirit wants to reveal how that is relevant to me and you – today. He wants us not only to believe in the truth but through trusting him that truth becomes part of us. The more that we share our lives with Jesus, and the more that we trust Him and His word, the more that truth becomes our way of life too. If His truth is in us and we trust Him day by day, then it makes a difference in our lives.

It is only natural that if the truth is in us and part of us then we will tell the truth – just as Jesus did – even when its hurts. It hurt Jesus in two ways. First it hurt him because when He told the people around Him the truth they were not at all pleased – they spread rumours about him, they physically abused him, made his life very difficult, persecuted Him, and of course in the end, they killed Him. Sometimes this is the impact that the truth that we tell and the truth in us will have on others and they will not like it and will treat us badly.

On other occasions Jesus told the truth to someone sadly because He knew that it was in their best interests to know that something was wrong but that it would hurt them to put it right. He told a rich young man that he needed to sell his possessions to get the freedom that he was looking for and he was very sad. He told Peter that he would deny Him and that upset Peter greatly. Are we courageous enough to pray that the Holy Spirit will speak the truth that we need to hear into our lives so that we can put it right?

The belt of truth also guards our private parts. This is difficult territory – it’s about Jesus ruling in the area of our sexuality, being true to the husband or wife that God appoints for us, not lying, not cheating and being open with them. Yes, God’s truth does not stop at the bedroom door – He will not tolerate promiscuity, exploitation nor abuse, nor condone selfishness, cruelty nor causing mental or physical harm to another person. Some get away with this now because it is done behind closed doors, they will need to give an account before God of it if they want to become His children or on the day of judgement, The Spirit of Truth commands that we confess our sins before the Lord to receive forgiveness for and freedom from them.

Lastly, there are times when even when we know the Lord, we can lose our way. We know when this is happening for a number of reasons, usually because we have put too much confidence in the flesh – our truth or experience and not His. Forsaking the truth will mean that our testimony suffers. Men will see and know that we have not followed or compromised what we believe. It is painful but the Spirit of Truth shows us the way back – by confessing our failings to the Lord and telling the truth to others about how we went wrong. Peter found a way back from his denial and how God used him!

May God bless and enrich your life

Please feel free to share this article and other articles on this site with friends, family and others

We invite you to join us and to be blessed as we read three chapters of the bible each day.
Today's readings are: 1 Corinthians 12,13 & 14

Why not visit us? We meet in Coleshill Town Hall, High Street, Coleshill, B46 3BG